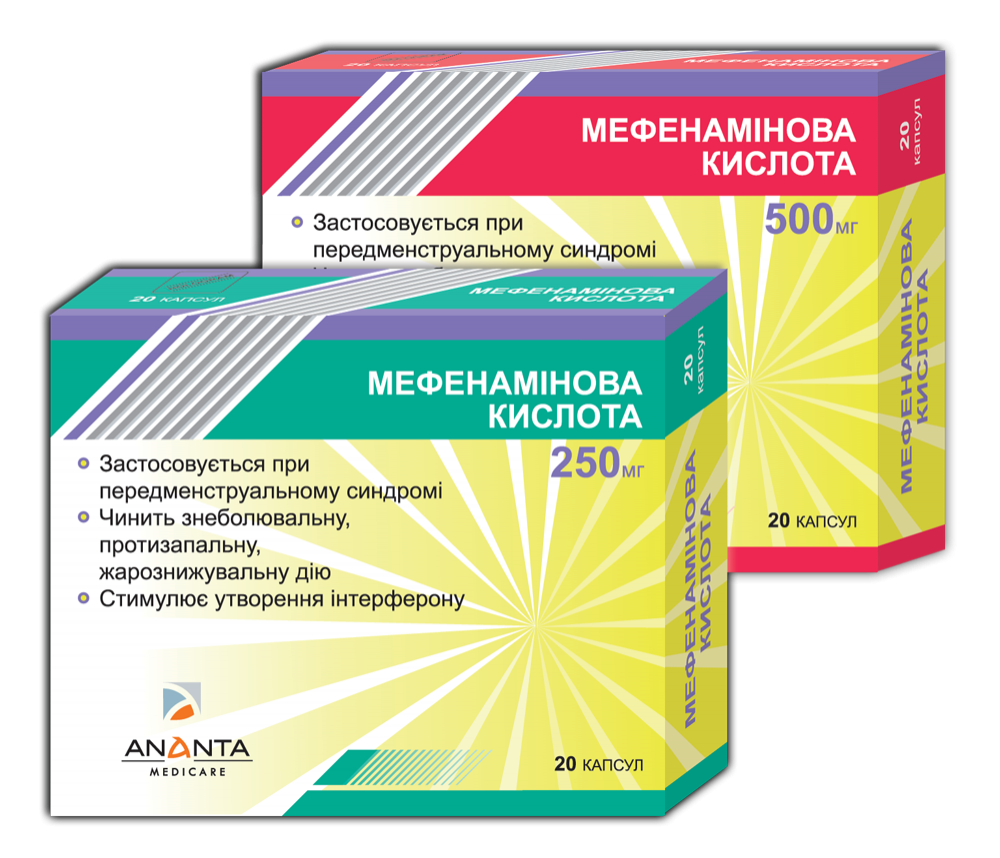 Mefenamic acid is a non-steroidal anti-inflammatory agent (NSAID). It has an anti-inflammatory, analgesic and antipyretic effect. It inhibits the synthesis of inflammatory mediators (prostaglandins, serotonin, kinins), reduces the activity of proteases lysosomes, which are a part of inflammatory reactions. Mefenamic acid affects the phases of exudation and proliferation. It stabilizes protein ultrastructure and cell membranes, reduces permeability of vessels and swelling of tissues. It inhibits cell proliferation in inflammation; increases the resistance of cells and promotes healing. Antipyretic effect is due to inhibition of prostaglandin synthesis and effect on thermoregulation center. Mefenamic acid stimulates the formation of interferon.

After oral administration it is rapidly and almost completely absorbed in the intestinal tract. Its maximum concentration in blood is reached in 2-4 hours. The level of concentration in blood is proportional to the dose. In the bloodstream it binds with albumin. The half-life makes 3 hours. It forms a series of metabolites in the liver. 67% of the dose is excreted unchanged in the urine, 20-25% - with faeces.

Hypersensitivity to mefenamic acid or to any of the excipients. Bronchospasm, angioedema, rhinitis, asthma or urticaria that occurred after use of acetylsalicylic acid or other NSAIDs. Concomitant use of specific COX-2 inhibitors. Present or anamnesis peptic and duodenal ulcers, inflammatory bowel disease, blood diseases, severe heart failure, sever liver or renal dysfunction, gastrointestinal haemorrhages or perforation caused by the intake of nonsteroidal anti-inflammatory drugs, treatment of pain after coronary-artery bypass surgery.

Methotrexate: Concomitant use of mefenamic acid and methotrexate may potentially increase the methotrexate concentrations in plasma and its toxic effect.

Probenecid: decrease in metabolism, delayed excretion of probenecid from the body.

Antihypertensive (ACE inhibitors and angiotensin II receptor antagonists): decrease of antihypertensive effect, increased risk of renal failure especially in elderly patients. Patients should drink enough liquid. It is also necessary to assess renal functions at the beginning of the treatment and during concomitant therapy.

Diuretics: decrease of diuretic effect. Diuretics may increase the nephrotoxicity of NSAIDs.

Mifepristone: NSAIDs should not be used within 8-12 days after taking mifepristone, because NSAIDs may reduce effect of mifepristone.

Zidovudine: NSAIDs increase the risk of hematologic toxicity. There is increased risk of bleeding in the joints and hematoma in HIV positive patients with haemophilia who receive concomitant treatment of zidovudine.

Concomitant use with other NSAIDs increases the anti-inflammatory effects and the likelihood of adverse reactions in the gastrointestinal tract.

Mefenamic acid is not used for patients who had hypersensitivity reactions previously (e.g. asthma, bronchospasm, rhinitis, urticaria or angioedema).

Do not use for dehydrated patients who lost fluid as a result of vomiting, diarrhoea or increased urination.

It is necessary to consult a doctor regarding long-term treatment of headaches.

Mefenamic acid may cause mild dysfunction of liver and kidneys. For patients who have these disorders, the drug therapy should be discontinued. Patients, treated with mefenamic acid for a long time, should be monitored due to the possibility of liver and renal impairments’ occurrence.

NSAIDs should be used with caution in patients with the history of gastro-intestinal tract diseases (ulcerative colitis, Crohn's disease, inflammatory disease of intestines), due to possible exacerbation. If the use of mefenamic acid leads to gastrointestinal bleeding or perforation, the treatment should be discontinued.

Elderly patients usually have an increased risk of developing gastrointestinal disorders, such as gastrointestinal bleeding and perforation, which may lead to lethal consequences, therefore the treatment should be started from the lowest dosage.

Mefenamic acid should be used with caution in patients with high risk of serious skin reactions, including exfoliative dermatitis, Stevens-Johnson syndrome and toxic epidermal necrolysis. At first manifestations of skin rash, mucous membrane lesions or any signs of increased hypersensitivity, the treatment should be discontinued.

As mefenamic acid may cause blood abnormalities at the long-term use, the monitoring of blood parameters should be carried out. In case of any dyscrasia manifestations the treatment should be discontinued.

Intake of mefenamic acid may cause disorders of gastrointestinal tract (e.g. diarrhoea). These disorders may occur either immediately after the drug intake or after long-term treatment. If such symptoms occur, the drug administration should be discontinued.

The drug should be used with caution in patients who receive concomitant treatment with medicines, which could increase the risk of haemorrhage development, such as corticosteroids, anticoagulants (warfarin) and aspirin.

The use of mefenamic acid may impair female fertility and is not recommended for women attempting to conceive. In case of dysmenorrhoea and menorrhagia symptoms or lack of response, women should consult a doctor.

Do not use the drug for pregnant women.

Do not use the drug for breastfeeding women.

Effects on ability to drive and operate machinery.

Be careful when driving or operating mechanisms that require increased attention, because sometimes the drug may cause drowsiness, blurred vision or convulsions.

Routes of administration and dosage.

Oral use.  Take medication after meals.

Intake of 250-500 mg 3-4 times a day is prescribed to adults and children over 12 years. If necessary, the daily dose can be increased to 3 g per day. After a therapeutic effect the daily dose should be reduced to 1 g

Recommended for children over 12 years of age.

Treatment: there is no specific antidote. Gastric lavage with suspension of activated charcoal. Urine alkalization and forced diuresis. Symptomatic therapy. Hemosorbtion and hemodialysis have little effect due to strong binding of mefenamic acid with blood proteins. Kidney and liver functions should be closely monitored. Frequent or prolonged convulsions should be treated with diazepam intravenously.

Storage conditions. Store in the original package at temperature not exceeding 30 °С. Keep out of reach of children.

Package. 10 capsules in a blister, 2 blisters in a pack.