TIGOFAST® — your protection from allergy!

Development of civilization and urbanization, synthesis of new chemical compounds and worsening of ecological situation give scientists every reason to suppose that the ХХІ century will become the century of allergic diseases. 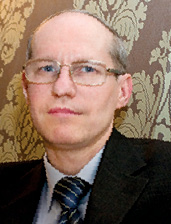 Really, the importance of this pathology for a modern person is difficult to overestimate. In the age of anthropogenic achievements and genetically modified products, allergy may be caused by any component of the environment. Professor of the Department of internal medicine No 2 of immunology and allergology of Kharkov National Medical University Vladimir Babadzhan told the correspondent of “Weekly journal APTEKA” about the situation in terms of allergic diseases and tactics of their treatment.

— Vladimir Danilovich, tell us how urgent this pathology is nowadays, please.

— Allergy has become so widespread that it takes leading positions in the structure of general sickness rate after oncologycal pathology, infectious and cardiovascular diseases. It is attributed to the fact that people are liable to the influence of a great number of allergens, i.e. chemical substances that are perceived by the organism as foreign ones. And it develops hyper-immune reaction towards them. This reaction in response to one would think indifferent for another person substance is called an allergic reaction. It may develop towards any compounds found in the environment. First of all these are aeroallergens, grass pollen in particular. When a person inhales it, allergic reaction develops at the site of contact. It manifests as rhinitis, rhinorrhea, lacrimation, pharyngitis, and conjunctivitis.

— Please, tell us, if there is a fundamental difference in mechanisms of allergic reactions of different types.

— There are 4 types of allergic reactions according to Coombs and Gell classification. Type I: immediate reactions with IgE hyperproduction. Its manifestations include anaphylactic shock, atopic dermatitis, urticaria, rhinitis, etc. Type II: cytotoxic type of reactions, which is characterized by formation of immunoglobulins to membranes of the cells circulating in blood (neutrophils and thrombocytes). Type III: immune complex reactions. IgМ and IgG antibodies are developed in response to the allergen; there forms an immune complex, initiating complement reaction, which acts destructively on the elements of connective tissue. As the result antibodies to organism’s own tissues are produced and autoimmune reaction begins. Type IV: delayed-type reaction, which is characterized by activation of T-lymphocytes, which destroy either the allergen itself, or structures that contain it. This type of reaction underlies such diseases, как atopic dermatitis, eczema and Lyell's disease.

— Is the question of different mechanisms of allergic reactions a matter of principle in the treatment of allergy?

— Speaking about treatment of allergic diseases it should be noted that any allergic reaction hasт 3 phases: the phase of immunological reactions — development of antibodies and their interaction with the allergen; the phase of pathochemical reactions — release of histamine, serotonin and secondary allergic mediators, such as leukotrienes, prostaglandins and some types of proinflammatory cytokines; pathophysiological phase — the development of clinical picture of allergic diseases. It is based on histamine action on tissues, as a result of which there develops rash of different character on skin surface, excessive sweating, rhinitis, conjunctivitis, pharyngitis, bronchospasm, and attacks of bronchial asthma. Due to vasodilating effect of histamine there may develop anaphylactic shock. So, if the cell is blocked against the action of histamine, inflammatory reaction in affected tissues does not develop. This principle underlies the action of antihistaminic preparations that block Н1-histamine receptors.

— But what is the difference between antiallergic medicinal preparations? 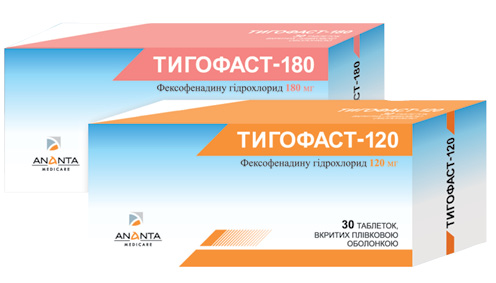 — Please, tell us about peculiarities of the preparation TIGOFAST®?

— It has 3 mechanisms of action: antihistaminic — blocking of Н1-histamine receptors; antiallergic — suppression of leukotriene and proinflammatory cytokine production; anti-inflammatory effect — decrease in production of granulocytic macrophage factor. Due to this fact the spectrum of its antiallergic influence is significantly broadened. The peculiarity of TIGOFAST also lies in the fact that being an active metabolite, it is not linked to cytochrome Р450 system, and thus it does not overload hepatocytes in relation to detoxification function. This medicinal preparation is excreted by liver and kidneys in unchanged state. Owing to such peculiarities, TIGOFAST® can be taken concomitantly with other preparations.

Its action begins in 15–30 minutes after the intake and lasts more than 24 hours, which differs it beneficially from its precursors, and the effect of the first dose, which is critically important in case of acute allergic reactions, is significantly stronger. In addition, after 2 weeks of administration, TIGOFAST® demonstrates more evident effect, than loratadine. That is why it may be considered rather reliable and having high safety profile and therefore it may be recommended in most allergic diseases, first of all in case of allergic rhinitis and pollinosis, which have direct immune globulin mechanism and acute early stage of the disease. Rapid initiation of the action of this medicinal preparation is especially effective in pollinosis patients. Allergic conjunctivitis, pharyngitis, acute urticaria, atopic dermatitis, bronchial asthma of allergic etiology — in case of all these diseases TIGOFAST® is the preparation of choice. Its use is also reasonable in complex treatment of anaphylactic shock.

In addition, when speaking about spectrum of use of TIGOFAST, it is impossible to omit medicamentous allergy, which is manifested by skin symptomatic — there may develop Quincke's edema, Lyell's syndrome, and Stevens-Johnson syndrome.

Thus, TIGOFAST® is a worthy representative of modern antihistaminic preparations, which will let patients control the symptoms of allergic reactions and improve significantly quality of their life.