Combination of analgetic and M-anticholinergic agents
Back to directory 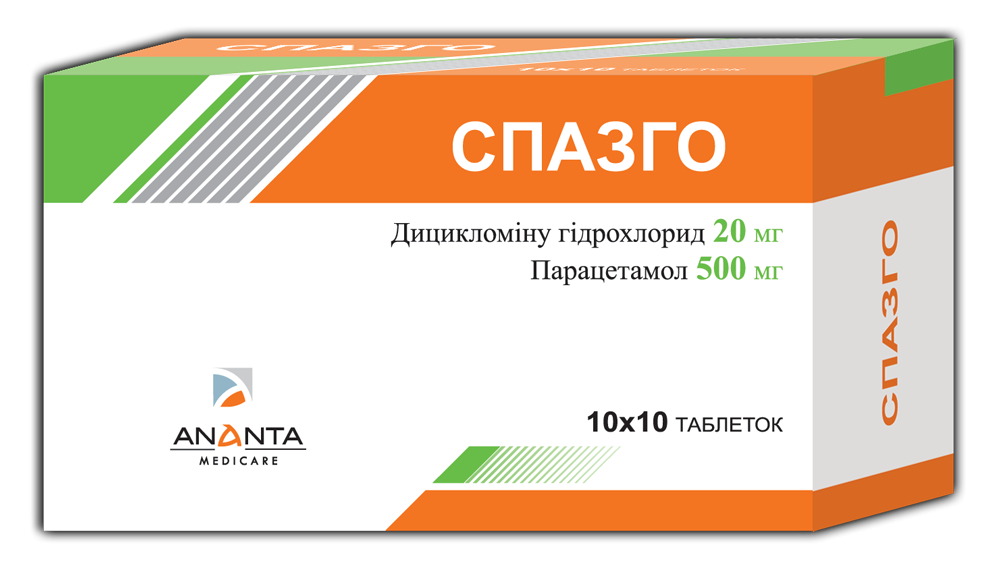 Main physical and chemical properties: round, flat tablets with scoring line on one side and one beveled edge, white or almost white color.

Dicyclomine hydrochloride is a tertiary amine. It has an anticholinergic activity and reduces the tonus of smooth muscles, eliminates pain, blocks an antagonist activity. Dicyclomine hydrochloride selectively paralyzes M-cholinoreactive structures, by blocking the transmission of impulses of postganglionic cholinergic nerves to innervated effector organs. It causes relaxation of smooth muscles, by exhibiting antispasmodic effect in smooth muscle spasms of the stomach, intestine, biliary tract, urogenital and circulatory systems.

Peculiarities of interaction of the drug are caused by the properties of its components.

It is necessary to consult your doctor regarding the use for patients with impaired renal and liver function.

If the patient uses warfarin or similar drugs that have anticoagulant effect then it is advisable to consult a doctor before using the drug.

It is necessary to monitor the picture of peripheral blood and functional state of the liver. Do not use paracetamol in combination with other drugs containing acetaminophen because of the possibility of exceeding recommended dose.

When prescribing the drug for more than three days a medical observation of the patient is required.

Older patients and patients who abuse alcohol should take the drug with caution.

The drug should be prescribed with caution for patients with heart failure, pyloric gastric stenosis, renal and liver dysfunction.

Gastroesophageal reflux may be increased.

Risk of hepatotoxic effect of paracetamol is increased in patients with alcohol-induced liver injury.

Paracetamol may affect the results of blood glucose tests and uric acid tests.

The drug should be prescribed with caution to patients with hypotension, a tendency to bronchospasm, as well as hypersensitivity to NSAIDs. In case of prolonged use cellular composition of peripheral blood and renal function status should be monitored.

Dicyclomine should be prescribed with caution for patients with ulcerative colitis (risk of paralytic obstruction), hernia of gastrointestinal aperture of diaphragm associated with reflux esophagitis.

The drug should be prescribed with caution at high ambient temperature (the likelihood of heat stroke and hyperthermia is increased due to decreased sweating).

Patients with mild arthritis, who take analgesics every day, should consult a doctor.

Do not exceed recommended dose.

If the symptoms persist, it is necessary to consult a doctor.

If the headache becomes constant, it is necessary to consult a doctor.

Use during pregnancy and lactation.

Do not use for pregnant and breastfeeding women

Effects on the ability to drive and operate machinery.

Considering that the drug may reduce the speed of psychomotor reactions in sensitive patients, it is recommended to refrain from driving vehicles and working with other machines that require concentration during the time of therapy.

Routes of administration and dosage.

The drug should be taken orally followed with little water (200 ml).

Adults and children over 15 years of age: 1 tablet depending on degree of pain, 1 to 4 times per day.

The maximum daily dose for adults is 2 tablets 4 times per day.

The physician individually, depending on the condition and response of the patient, determines duration of the treatment.

Do not use for children under 7 years old.

Symptoms of paracetamol overdose. Liver damage is possible in adults who have taken 10 or more grams of paracetamol and in children who have taken the medicinal agent at a dose of more than 150mg/kg body weight. Intake of 5 or more grams of paracetamol may cause liver damage in patients with risk factors (long-term treatment with carbamazepine, phenobarbital, phenytoin, primidone, rifampicin, St. John’s-wort or other drugs that induce liver enzymes; regular excessive consumption of ethanol; glutathione cachexia (digestive disorders, mucoviscidosis, HIV infection, starvation, cachexia).

Symptoms of paracetamol overdose in the first 24 hours are pallor, nausea, vomiting, anorexia and abdominal pain. Liver damage may become a clear symptom in 12 to 48 hours after overdose. Abnormalities of glucose metabolism and metabolic acidosis may occur. In case of severe poisoning, hepatic failure may progress into encephalopathy, haemorrhage, hypoglycaemia, cerebral oedema, and death. Acute renal failure with acute tubular necrosis may appear as loin pain, haematuria and proteinuria, and it may develop even in the absence of severe liver damage. Cardiac arrhythmias and pancreatitis have also been reported.

Immediate treatment is essential in case of paracetamol overdose. Despite the lack of significant early symptoms, patients should be taken to hospital urgently for immediate medical attention. Symptoms may be limited to nausea or vomiting and may not reflect the severity of overdose or the risk of organ damage.Treatment with activated charcoal should be considered if the overdose of paracetamol occurred within 1 hour. Paracetamol concentration in blood plasma should be measured in 4 hours or later after the intake (earlier concentrations are unreliable). Treatment with N-acetylcysteine may be used during up to 24 hours after paracetamol intake, however, its maximum protective effect is obtained during up to 8 hours post ingestion. The effectiveness of the antidote is sharply decreased after this time. If required the patient should be given intravenous-N-acetylcysteine, in accordance with the established dosage schedule. If the patient does not suffer from vomiting, methionine taken orally may be a suitable alternative in remote areas outside of hospital.

Overdose has two stages: The first stage is characterized by a stimulation of the central nervous system with the signs of anxiety, illusions, hallucinations, stable mydriasis, tachycardia and arterial hypertension. On the second stage, there is CNS depression which may lead to coma.

Treatment: gastric lavage followed by the use of activated charcoal, symptomatic therapy. Prescription of methionine in 8-9 hours after overdose and N-acetylcysteine in 12 hours after overdose (as antidotes to paracetamol), monitoring of the respiratory and circulatory systems’ state should be carried out (do not use epinephrine). In case of convulsions, diazepam is prescribed.

Respiratory, thoracic and mediastinal disorders: bronchospasm in patients that are sensitive to aspirin and other NSAIDs.

Storage conditions. Store in the original package at temperature not exceeding 30 °С. Keep out of  reach of children.