Macrolides
Back to directory 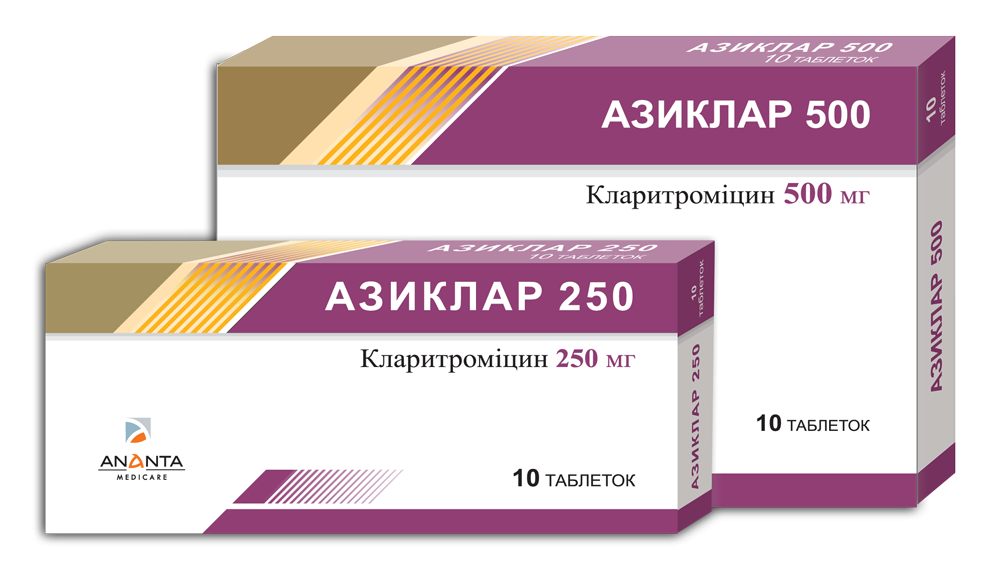 – gastric or duodenal ulcer, associated with Helicobacter pylori (compulsory in combination with other medicinal agents).

for medical use of the preparation

– gastric or duodenal ulcer, associated with Helicobacter pylori (compulsory in combination with other medicinal agents).

Hypersensitivity to clarithromycin or any other component of the preparation or other macrolide antibiotics; concomitant use with ergot derivatives, cisapride, pimozide, terphenadine, astemizole and other macrolides (may lead to prolongation of the QT interval and cause arrhythmia, as well as ventricular fibrillation and Тorsades de Рointes). Clarithromycin is not indicated to the patients with hypokalemia (prolongation of the QT interval).

Way of introduction and doses.

Tablets should be taken as a whole (do not crush, do not chew) with liquid. Food intake practically does not influence the absorption of the preparation, but it may somewhat delay this process.

Adults and children over12 years old: usually it is indicated clarithromycin 250 mg twice a day; for sever infections the dose may be increased up to 500 mg twice a day. As a rule the course of treatment lasts 7 - 14 days. The treatment should last at least 2 more days after disappearance of the main symptoms of the disease.

Eradication of Helicobacter pylori in adults.

In patients with gastric or duodenal ulcer, associated with Helicobacter pylori, clarithromycin is used in dosed of 500 mg  twice a day together with amoxicillin 1000 mg twice a day and omeprazole 20 mg twice a day. The duration of treatment is 7 days.

In patients with severe renal dysfunction (creatinine clearance <30 ml/min) total dayly dose should be half-reduced, i.e. to 250 mg once a day or 250 mg twice a day in severe infections.

The most frequent side effects are diarrhea, nausea, taste alteration, dyspepsia, abdominal pain and headache.

Disturbance from the side of blood-vascular system and lymphatic system: leukopenia, eosinophilia; seldom thrombocytopenia, neurtopenia.

Hepatobiliary disorders: seldom – hepatocellular and/or cholestatic hepatitis with jaundice or without it, hepatic dysfunction associated with pre-existing disease, and in patients concomitantly using hepatotoxic preparations.

Disturbance from the side of kidneys: very seldom – interstitial neuritis, renal insufficiency.

Treatment: there is no specific antidote. Gastric lavage, use of activated charcoal. Appropriate symptomatic treatment for maintenance of vital organs and systems. It is unlikely that hemodialysis or peritoneal dialysis can influence the level of clarithromycin in serum, so these procedures are not recommended. In case of over dose the use of clarithromycin should be discontinued and appropriate symptomatic treatment should be started.

Use in pregnancy and lactation.

If during treatment there developed expressed diarrhea, it is necessary to exclude the possibility of the development of pseudomembranous colitis.

There have been reports of increasing symptoms of myasthenia gravis in patients using clarithromycin.

The preparation should be used with caution in patients with severe heart diseases, with disorders of electrolyte balance in anamnesis. Due to the risk of prolongation of the QT interval it is necessary to be careful using clarithromycin in patients with ischemic heart disease, ventricular fibrillation in anamnesis, severe cardiac insufficiency or in case of concomitant use with other agents having the effect of prolongation of the QT interval.

Prolonged or repeated use of clarithromycin may lead to the development of superinfection caused by microorganisms insensitive to the preparation.

The preparation contains lactose,so the patients with rare inherited forms of galactose intolerance, lactose deficiency or syndrome of glucose galactose malabsorbtion should not use the preparation.

The ability to influence the reaction time when driving and working with other mechanisms.

Before ascertaining the individual reaction to the preparation it is recommended to be careful when driving or operating complicated machines, espessially at the beginning of the treatment or altering the dose.

Interaction with other drugs and other forms of interaction.

Clarithromycin is metabolized in liver where it inhibits the activity of certain enzymes of cytochrome Р450system. Accordingly may decrease metabolism of different preparations transforming with the help of these enzymes (such as alprazolam, astemizole, terfenadine, cisapride, pimozide, carbamazapine, hexobarbital, bromocriptine, valproate, rifabutin, warfarin, digoxin, алкалоїди ріжків, triazolam, midazolam, methylprednisolone, quinidine, sildenafil, disopyramide, phenytoin, cyclosporine, tacrolimus, zidovudine, theophylline, vinblastine). It leads to increasing of their concentration in the serum; there may occur toxic effects. That is why clinical control, and if needed – determination of the concentration these preparations in serum, is required.

Post-marketing research indicates that concomitant use of clarithromycin and ergotamine or dihydroergotamine associates with signs of acute ergotism characterized by angiospasm and limb and tissue ischemia, including central nervous system.

Clarithromycin inhibits metabolism of HMG-CoA reductase inhibitors which leads to increased concentration of the last in plasma. Seldom patients using clarithromycin withsimvastatin, lovastatin or atorvastatin, developed rhabdomyolysis, so such patients should be controlled as for the appearance of myopathy.

Use of clarithromycin in patients, receiving warfarin, may cause increasing effects of the last. That is why in such patients it is important to monitor prothrombin time.

There are post-marketing reports about development of pirouette ventricular tachycardia, caused by concomitant use of clarithromycin and quinidine or disopyramide. It is recommended to carry out FCG-monitoring for timely detection of prolongation of the QT interval. During therapy with clarithromycin it is necessary to control the concentration these preparations in serum.

During post-marketing observation there have been reports about increased serum concentrations of digoxin in patients using clarithromycin with digoxin. Some patients have developed the signs of digitalis intoxication, including potentially fatal arrhythmias. It is necessary to control serum concentrations of digoxin when it is used with clarithromycin.

Use of clarithromycin in combination with omeprazole may lead to increasing balanced concentrations of omeprazole, but there is no need to change the dose.

There is possible drug interaction between clarithromycin and atazanavir, itraconasole, sacvinavir.

Clarithromycin does not influence the efficirncy of oral contraceptives.

Clarithromycin is a semisynthetic antibiotic of macrolide group. Its  antibacterial action is a result of protein synthesis inhibition due to binding with 50S-subunit of sucseptible baiteria ribosomes. It acts mainly bacteriostatically, but as for some microorganisms it produces bactericidal effect. The preparation has high specific activity as for wide spectrum of aerobic and anaerobic gram-positive and gram-negative microorganisms. Minimal inhibiting concentrations for clarithromycin, as a rule, twice lower than for erythromycin.

Clarithromycin is active as for the following microorganisms:

The spectrum of antibacterial action of clarithromycin is similar to that of erythromycin, except that it is active as for atypical microbacteria.

Pharmacokinetics. Clarithromycin absorbs quickly and effectively from gastro-intestinal tract, mainly in small intestine; it preserves its activity in presence of gastric juice; concomitant use of food slightly slows the absorption, but does not influence the degree of absorption. The bioavailability of the preparation is approximately 55 %.

It is metabolized in liver by cytochrome Р450 system with participation of isoenzyme CYP3A4 in three main ways (demethylation, hydroxylation and hydrolysis) to 8 metabolites. After absorption about 20% of the preparation is metabolized with formation of 14-hydroxyclarithromycin, which has biologic activity similar to those of clarithromycin.

It is 70 - 80 % excreted with feces, approximately 20-30 % – with urine in unchanged state. This portion increases with increasing of the dose of the preparation. In case of renal insufficiency plasma concentration of clarithromycin increases if the dose is not decreased.

Store at temperature below 30єC in the original package.

Keep out of the reach of children.

Packing. 10 tablets in a blister; 1 blister in a carton.

Category of dispensing. On prescription.

Name and address of the manufacturer.

Name and address of the marketing company.