Triazole derivatives
Back to directory 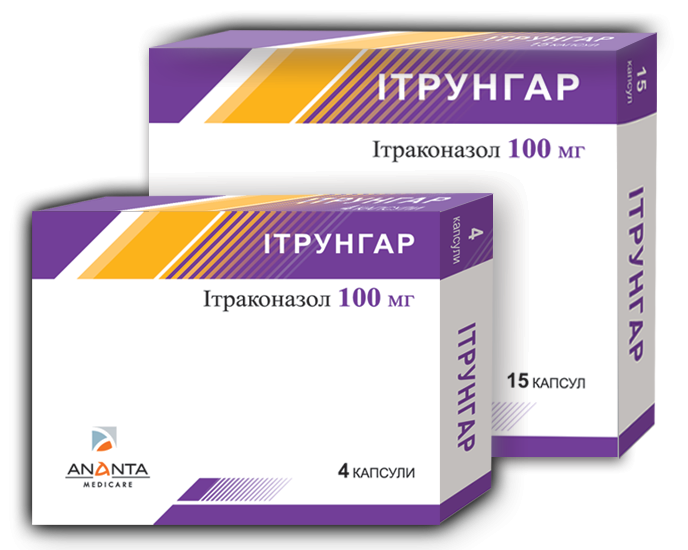 INSTRUCTION
for medical use of the preparation
ITRUNGAR

Contraindications. Individual hypersensitivity to the preparation or its ingredients. Concomitant use of the preparations that metabolize with participation of CYP3A4 enzyme and able to increase QT-interval, such as astemizole, bepridil, cisapride, dofetilide, levacetylmethadol (levomethadyl), mizolastine, quinidine, pimozide, quinidine, sertindole and terfenadine.

Way of administration and doses. For internal use. For optimal absorption the preparation capsules “Itrungar” should be used immediately after intake of high-caloric food.

Capsules should be swallowed as a whole.

onychomycoses, caused by dermatophytes and/or yeast

One course of pulse-therapy consists of taking two capsules “Itrungar” twice a day (200 mg twice a day) for 1 week. For treatment of mycotic lesions of hand nail plates 2 courses are recommended. For treatment of mycotic lesions of toe nail plates 3 courses of pulse-therapy are recommended. The interval between courses should be 3 weeks.

Clinical results will manifest after the end of treatment with nail growth. Pulse-therapy regimen is given in the table.

There is no data as for the cases of overdose. Enhancement of side effects of the preparation is possible.
Treatment is symptomatic and supportive. There is no specific antidote for itraconazole. The active substance is not excreted at haemodialysis.

Use during pregnancy and lactation.

During pregnancy the preparation is indicated only for systemic mycoses that are life-threatening, when expected benefit for future mother overcomes the risk of negative influence on the fetus. Women of child-bearing age are recommended to use effective contraceptive agents during treatment with the preparation. In case of needed treatment with itraconazole during lactation period the women should discontinue breast-feeding.

Children.
As there is not enough clinical data as for the use of Itrungar in capsules in children, it is recommended to use itraconazole in such patients only when possible benefit significantly overcomes potential risk.

It is estimated, that itraconazole has negative inotropic effect. There have been reports on cases of congestive heart failure, associated with itraconazole intake. Itrungar should not be taken by the patients with congestive heart failure or with presence of this disease in anamnesis unless those cases when possible benefit overcomes potential risk. At individual assessment of the ration benefit/risk the following factors should be taken into consideration: seriousness of indications, dose regimen and individual risk factors as for the development of congestive heart failure. The risk factors include the presence of heart diseases, such as coronary disease or valve lesions; serious lung diseases, such as obstructive lung lesions; renal insufficiency or other diseases, accompanied with edemas. Such patients should be informed about the signs and symptoms of congestive heart failure. The treatment should be carried out with caution. During treatment signs and symptoms of congestive heart failure should be monitored. In case of development of signs or symptoms during the course of treatment the intake of Itrungar should be discontinued.
Caution should be exercised at concomitant use of itraconazole and calcium channel-blocking agents.
At decreased gastric acidity the absorption of itraconazole in the bowels with Itrungar capsules worsens. The patients, receiving the preparations to decrease the acidity (such as aluminium hydroxide), should do it not earlier than 2 h after Itrungar intake. The patients with achlorhydria, for example, AIDS patients, or those, receiving Н2-blockers or proton pump inhibitors, are recommended to take Itrungar capsules with cola.

There are reports on the cases when at itraconazole use very seldom there developed severe hepatotoxicity, including cases of acute and fatal liver insufficiency. Those cases, which were registered, were observed in the patients, who previously had liver disease, received treatment on systemic indications and/or took preparations, which can cause hepatotoxic action. In some patients there were no evident risk factors from the side of the liver. Some of these cases were observed during the first month of treatment, including first weeks. That is why, it is recommended to monitor liver function in the patients, receiving Itrungar. The patients should be informed as for the necessity of urgent turning to the doctor in case of signs or symptoms of hepatitis, in particular: anorexia, nausea, vomiting, fatigue, abdominal pain or dark coloration of the urine. The patients with such symptoms should urgently discontinue the treatment and undergo liver function investigation. In the patients with increased level of liver enzymes, active liver diseases or those having experienced cases of liver toxicity at use of other preparations, the initiation of treatment is not recommended unless expected benefit from the use of the preparation overcomes the risk of liver dysfunction. In such cases monitoring of the level of liver enzymes is required.

Ability to influence the rate of reaction when driving or operating other mechanisms.

As itraconazole is mainly broken down by CYP3А4 enzyme, potential inhibitors of this enzyme can increase the bioavailability of itraconazole. The examples can be ritonavir, indinavir, clarithromycin and erythromycin.

2. Influence of itraconazole on the metabolism of other medicinal preparations.

Itraconazole can inhibit the metabolism of medicinal preparations, which break down with the enzymes of cytochrome 3А family. As a result there can occur increase or prolongation of their action, including side effects. After the discontinuation of the treatment the levels of plasma itraconazole decrease slowly due to the dose and duration of the treatment. It should be taken into consideration when estimating inhibiting effect of itraconazole on the metabolism of the preparations, which are indicated concomitantly.

Astemizole, Bepridil, Cisapride, dofetilide, levacetylmethadol (levomethadyl), mizolastine, quinidine, pimozide, sertindole and terfenadine are contraindicated for concomitant use with the preparation, as it can lead to increased plasma concentrations of these substrates, which, in its turn, can lead to prolongation of QT intervals and in rare cases – to torsade de pointes.

Preparations, broken down by CYP3А4 enzyme are inhibitors of HMG-CoA reductase, such as atorvastatin, simvastatin andlovastatin.

At concomitant use of itraconazole and calcium channel-blocking agents, caution should be exercised due to increased risk of congestive heart failure. In addition to possible pharmakc kinetic interaction with participation of metabolizing CYP3А4 enzyme calcium channel-blocking agents can cause negative inotropic effect, which can enhance similar effect of itraconazole.

Medicinal preparations that should be indicated under control of the level of their plasma concentration, action and side effects (at their concomitant use with itraconazole the dose of the indicated preparations should be decreases if required):
- oral anticoagulants;

- some antitumor preparations, such as pink colorant alkaloids (Vinca), busulfan, docetaxel and trimetrexate;

- calcium channel-blocking agents, broken down by CYP3А4 enzyme, such as dihydropyridine and verapamil;

Interaction of itraconazole with AZT (azidothymidine) and fluvastatin has not been estimated.

No influence of itraconazole on metabolism of etinilestradiol and norethisterone has been observed.

Studies in vitro demonstrated no interaction at binding with plasma proteins between itraconazole and such preparations as imipramine, propranolol, diazepam, cimetidine, indometacin, tolbutamide, sulfametazin.

Pharmacological properties.
Pharmacodynamics. Triazole derivative, synthetic antimycotic agent, active as for wide spectrum of causative agents. The mechanism of action is conditioned by inhibition of ergosterol synthesis – important component of mycotic cellular membrane. Preparation-susceptible are: Trichophyton spp., Epidermophyton floccosum, Microsporum spp., Candida spp. (including C. albicans, C. glabrata and C. krusei), Cryptococcus neoformans,  Aspergillus spp., Histoplasma spp., Paracoccidioides brasiliensis, Sporothrix schenckii, Fonsecaea spp., Cladosporium spp., Blastomyces dermatidis as well as some other microorganisms. Clinical effect of the preparation is fully manifested in 2–4 weeks after the end of therapy in patients with skin mycosis and in 6–9 months after the end of therapy in patients with onychomycosis (with nail growth).

Pharmacokinetics in special clinical cases: in the patients with renal and hepatic insufficiency, as well as in some patients with immunosuppression (for example, with AIDS, neutropenia, after organ transplantation) the bioavailability of itraconazole can decrease.
Pharmaceutical characteristics.
Main physical and chemical properties:
Solid gelatine capsules with yellow shell and green cap or vice versa (size 0); content of the capsule – pellets of white to grey colour.

Storage conditions. Keep out of the reach of children in the original package at temperature below 25єC.
Packing. 4 or 15 capsules in a blister, 1 blister in a package.

Name and Address of the Manufacturer. Ananta Medicare Ltd.