Solutions for infusion
Back to directory 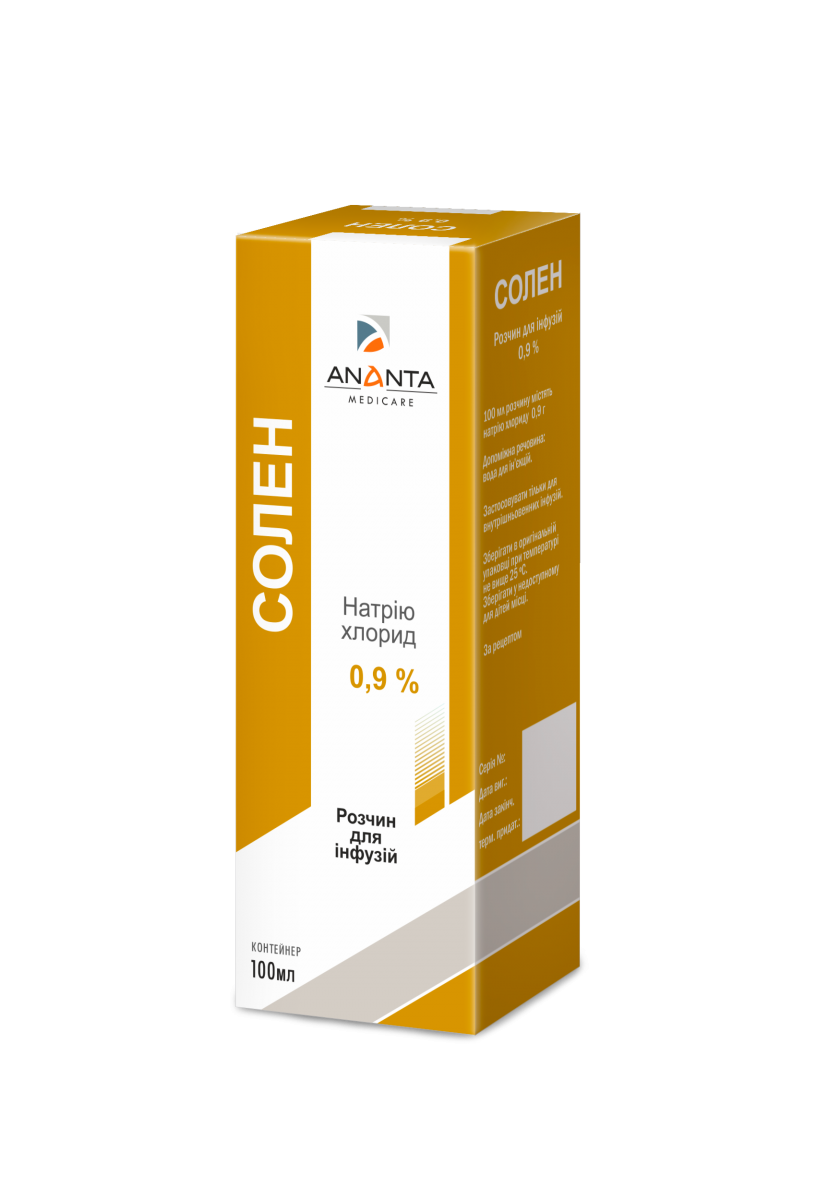 Vehicle or diluent of compatible drugs.

Sodium Chloride 0.9% intravenous infusion is an isotonic solution, with an approximate osmolarity of 308 mOsm/l.

The pharmacodynamic properties of the solution are those of the sodium and chloride ions in maintaining the fluid and electrolyte balance. Ions, such as sodium, circulate through the cell membrane, using various mechanisms of transport, including the sodium pump (Na-K-ATPase). Sodium plays an important role in neurotransmission, cardiac electrophysiology and the renal metabolism as well.

Sodium is predominantly excreted by the kidney, but there is extensive renal reabsorption.

Small amounts of sodium are observed in the faeces and sweat.

Vehicle or diluent of compatible drugs.

The solution is contraindicated in patient with hypernatraemia or hyperchloraemia.

The contraindications related to the added medicinal product should be considered.

The below listed drugs increase the vasopressin effect, leading to reduced renal electrolyte excretion and may increase the risk of hospital acquired hyponatraemia following inappropriately balanced treatment with intravenous fluids.

Other medicinal products increasing the risk of hyponatraemia also include diuretics in general and antiepileptics such as oxcarbazepine.

Corticoids/steroids and carbenoxolone, are associated with the retention of sodium and water (with oedema and hypertension).

Use in patients with severe renal impairment

Risk of fluid and/or solute overload and electrolyte disturbances

Depending on the volume and rate of infusion, intravenous administration of sodium chloride 0.9% can cause:

- Fluid and/or solute overload resulting in hyperhydration/hypervolemia and, for example, congested states, including central and peripheral oedema.

Special clinical monitoring is required at the beginning of any intravenous infusion. Clinical evaluation and periodic laboratory determinations may be necessary to monitor changes in fluid balance, electrolyte concentrations, and acid-base balance during prolonged parenteral therapy or whenever the condition of the patient or the rate of administration warrants such evaluation.

High volume infusion must be used under specific monitoring in patients with cardiac or pulmonary failure and in patients with non-osmotic vasopressin release (including SIADH), due to the risk of hyponatraemia.

Children, women in the fertile age and patients with reduced cerebral compliance (e.g. meningitis, intracranial bleeding, cerebral contusion and brain oedema) are at particular risk of the severe and life-threatening brain swelling caused by acute hyponatraemia.

Use in patients at risk for sodium retention, fluid overload and oedema

Sodium chloride 0.9% should be used with extreme caution in patients at risk of:

Medications, such as corticosteroids, that may increase the risk of sodium and fluid retention.

Symptoms of unknown aetiology which can appear to be hypersensitivity reactions have been reported very rarely in association with infusion of sodium chloride 0.9 %. These have been characterized as hypotension, pyrexia, tremor, chills, urticaria, rash and pruritus. Stop the infusion immediately if signs or symptoms of these reactions develop. Appropriate therapeutic countermeasures should be instituted as clinically indicated.

The consulting physician should be experienced in this product's use and safety in these special populations that are especially sensitive to rapid changes in serum sodium levels.

Plasma electrolyte concentrations should be closely monitored in the paediatric population as this population may have impaired ability to regulate fluids and electrolytes. Repeated infusions of sodium chloride should therefore only be given after determination of the serum sodium level.

Sodium chloride 0.9% should be administrated with special caution for pregnant women during labour particularly as to serum-sodium if administered in combination with oxytocin.

Caution is advised with patients with pre-eclampsia.

When other medicinal product is added, the nature of the drug and its use during pregnancy and lactation has to be considered separately.

Effects on ability to drive and use machines.

No studies have been conducted on the influence of sodium chloride 0.9% on the ability to drive vehicles or operate other machines.

Method of administrations and dosage.

Fluid balance, serum electrolytes and acid-base balance should be monitored before and during administration, with particular attention to serum sodium in patients with increased non-osmotic vasopressin release (syndrome of inappropriate antidiuretic hormone secretion, SIADH) and in patients co-medicated with vasopressin agonist drugs, due to the risk of hospital acquired hyponatremia. Monitoring of serum sodium is particularly important for hypotonic fluids.

Theoretical osmolarity of sodium chloride 0.9% for intravenous infusion is 308 mOsm/l.

The rate and volume of infusion depend on the individual patient's condition.

The recommended dosage when used as a diluent ranges from 50 to 250 ml per dose of medicinal product to be administered.

Children with isotonic dehydration and sodium depletion should be administered 20 to 100 ml/kg body weight/day, depending on age and body weight.

Plasma electrolytes should be closely monitored because the ability to regulate water-electrolyte balance in paediatric patients may be reduced. Repeated infusion of sodium chloride should be performed only after determination of serum sodium levels.

An excessive volume of sodium chloride 0.9% may lead to hypernatraemia (which can lead to CNS manifestations, including seizures, coma, cerebral oedema and death) and sodium overload (which can lead to central and/or peripheral oedema) and should be treated by an attending specialised physician.

Excess chloride in the body may cause a loss of bicarbonate with an acidifying effect.

When sodium chloride 0.9% is used as a diluent for injectable preparations of other drugs, the signs and symptoms of over infusion will be related to the nature of the additives being used. In the event of accidental over infusion, treatment should be discontinued and the patient should be observed for the appropriate signs and symptoms related to the drug administered. The relevant measures should be provided as necessary.

The following adverse reactions have been reported in post-marketing experience. The frequency of the adverse drug reactions listed in this section cannot be estimated from the available data.

* Hospital acquired hyponatraemia may cause irreversible brain injury and death, due to development of acute hyponatraemic encephalopathy, frequency unknown.

The following adverse reactions have not been reported with this product but may occur:

When sodium chloride 0.9% is used as a diluent for injectable preparations of other drugs, the nature of additives will determine the likelihood of any other adverse reaction.

If an adverse event occurs the patient should be evaluated and appropriate counter measures be started, if needed the infusion should be stopped. The remaining part of the solution should be kept for investigation if deemed necessary.

Chemical and physical stability of any additive at the pH of sodium chloride 0.9% intravenous infusion should be established prior to use.

From a microbiological point of view, the diluted product must be used immediately unless dilution has taken place in controlled and validated aseptic conditions. If not used immediately, in-use storage times and conditions are the responsibility of the user.

Store in the original packaging at a temperature not exceeding 25 °С.

Keep out of reach of children.

100 ml of preparation in a container. 1 film-coated container in a box.